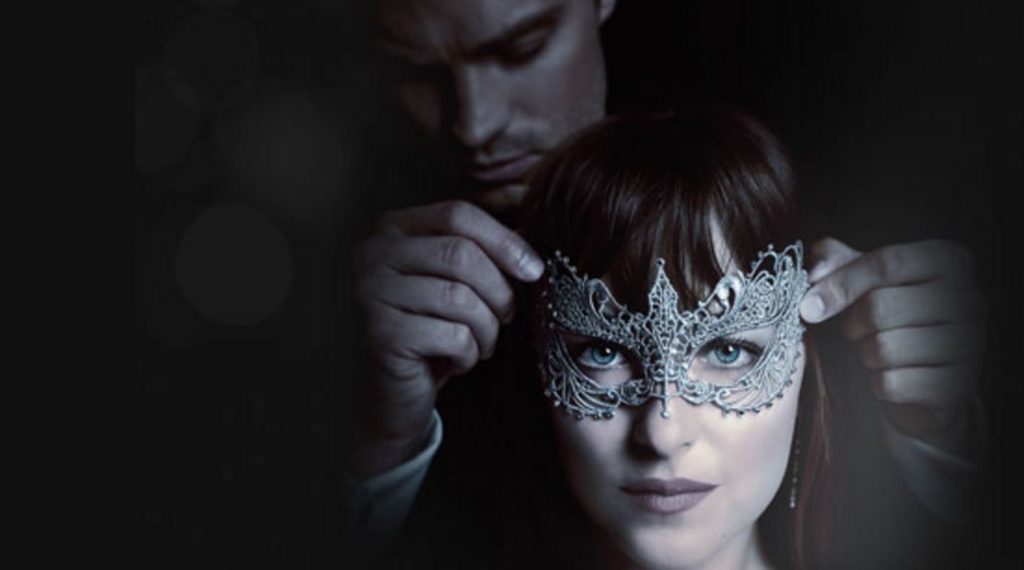 Firstly, I want to preface this review with the fact that it was requested by the head of the NZ 50 Shades fan club – Florence.

Secondly…my wife reckons she would direct the shit out this film. She would have hired hot actors and then had loads and loads of sex scene flashes. I’m not sure that her directorial prowess would have saved what I feel was a slightly sadistic trainwreck of misguided romanticism (at it’s best).

The movie didn’t give me much to hope for when it opens with a cover of Coldplay’s – The Scientist.  If you want to associate sexual provocativeness with something, surely one would not automatically leap to Chris Martin’s warbling…although, maybe the relation is to punishment?

I didn’t have high hopes for this film, based on what I would class as a waste of celluloid with 50 shades of Grey, but I gave it a solid nudge and must admit that the sequel is a great deal better the the first outing for Miss Steele….though that isn’t saying a great deal, I think I have had a case of heartburn that was better than the initial adventures of Steele and Grey.

This girl must bathe in stalker pheremones.  Her photographer ̶b̶o̶y̶f̶r̶i̶e̶n̶d̶ friendzoned mate hosts a gallery opening where he unveils a crapload of pictures he has taken of her…..without asking her first.  Christian Grey is quite obviously a crazy stalker (I mean, I don’t care if he turns up with a bottle of wine and car keys in her bedroom, it is still a little stalkery)…but we have another stalker type person, her boss Jack Hyde (apparently a serial Lothario with a history of sexualising his assistants).

Jack doesn’t seem to like the standard pissing contest that he feels that he is in with Christian Grey (probably knowing that, as a billionaire, Grey would be able to piss a lot further and from a greater height) and as such get’s a little forceful with our Miss Steele (little does he know, she is getting quite enamoured with a little bit of “handsiness” with C.Grey throwing down such amazing platitudes as “I don’t know whether to worship at your feet or spank the living shit out of you.”

Admittedly, Ana starting to get her own back and telling Mr. Grey how it is, was quite refreshing. “Your new favourite flavour” she tells Christian as she holds up a container of Vanilla icecream……I didn’t get it.  My wife who was laughing her arse off and insists it was the funniest joke of the whole movie, had to explain it to me (and I even looked up the urban dictionary definition).

Vanilla
normal and boring sex.
used by more sexually adventerous people kinked to describe the dull sex had by the unimaginative
he’s so vanilla he probably thinks leaving the lights on is dirty.

*gasp* and here I was thinking “maybe that’s already his favourite flavour Ana, why you gotta be so aggressive and forceful with your icecream choices huh?”…little did I know, I’m just an innocent person who has no idea about anything outside of normal sexual proclivities.

…just once, will you do what you’re told?

Anyway, no Christian, she will not.  She’s gotten a taste of freedom, you chased her down and brought her back and now she realises that she is in control…no Christian, you do as YOU’RE told.

Oh how wonderful to be a billionaire. Unable to go to the hair salon? Arrange for some fabulously flamboyant hair stylist to come to your home to give you an “up-do”. No time to shop for that beautiful ball-gown that you need for that event you were invited to? Have Taylor pop down to the local Myer store to pick something up for you *disclaimer* – pretty sure he didn’t purchase her 27 dresses from Myer.

Mr Grey walks in to find Ana all decked out in some fancy intimates and proceeds to tell her to “wear these tonight” (while holding up a pair of (what look like) stainless steel ball bearings.  These are then carefully inserted…somewhere…..I think it may have been IN HER VAGINA (prior to bedecking herself out in her masquerade attire and attending the ball…while wearing balls).